Update 2: Looks like page load times, at least as reported by Pingdom, went up from what they initially were. In my own testing cached pages still load in something like 150 to 250 milliseconds but Pingdom disagees. I don't know if this is regular CloudFront performance fluctuation, some kind of impedance mismatch between Pingdom and CloudFront or "something else".

Update: That really did the trick and the estimated -90% page load time wasn't that far off:

Having been fed up with wastefulness (resource wise) and general slowness of the MySQL/PHP/WordPress/CloudFlare setup for some time, I have now moved this site to S3/CloudFront. Site is generated from an XML file (which I derived from a WordPress export dump) with a Python script that is hosted here. Commenting is obviously impossible but if you for some reason need to contact me you'll find contact details on your left. 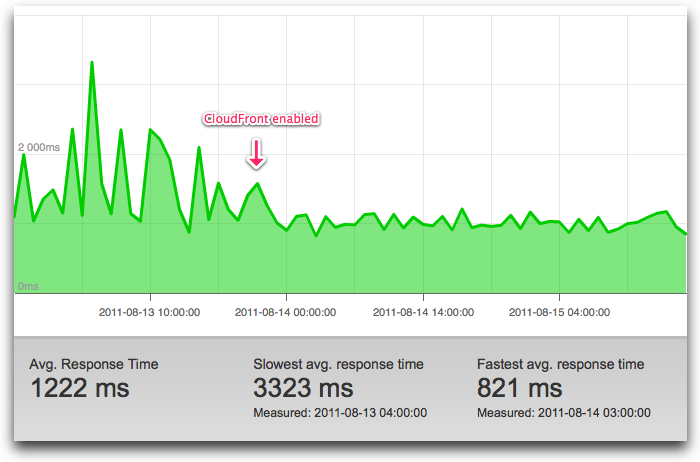 Performace-wise, setting up Amazon CloudFront ("Custom Origin") in addition to WP Minify and WP Super Cache improved site response times a lot. Offloading static content to Amazon not only made those offloaded files load faster (because of Amazon's faster tubes) but this also reduced stress on our feeble-ish server on page load so that the document itself is returned faster. Load time is also more repeatable. Good stuff!

Note that CloudFront makes HTTP/1.0 requests and Apache may take some convincing in order to make it Gzip the 1.0 response.